It’s not often that a game comes along that offers some sort of “new” gameplay for you to enjoy. This is especially present in puzzle games which are often cut and paste or try to follow a certain trend. However, the same cannot be said of Bonkis – an out of the ordinary physics-based puzzle where I had to drag and drop objects in an area to adapt them to a specific shape, thus avoiding collisions, bombs and the awkwardness of my co-op partner.

For the majority, Bonkis the principle is simple. You are a monkey traveling across the galaxy and completing puzzles while you are. Instead of using your hands and feet to carry items, players rely on a mechanical arm and space suit powered by a jet pack. Each stage has the same objective and that is to transport the things in the level and build the required shapes within the given time.

It may sound simple, but it is far from being. A Bonkie (the monkey things) are hard to control and even harder to master, but that’s where most of the fun comes in. You use the triggers to get the monkey up and down using his jetpack as thrusters. The jetpack is then controlled with the left stick and it’s determined by the angle of the thruster because you know, physics. The d-pad then controls the robotic arm which is the grapple. It’s not the usual control pattern you’d expect, but it’s fun nonetheless.

Objects constitute the bulk of the work in Bonkis and players have to pick them up and carry them across the area and place them to form the required shape at each stage. Once you match the figure, you win. The more players you have, the easier it is to carry bigger and heavier items, but it also works well in solo.

The levels vary in difficulty and while I started making basic shapes, later levels not only changed them but also added items that could make or break the level. For example, there are bombs that can explode if you hit them with enough force, and blocks of ice that shatter when you hit them too hard. If you haven’t guessed yet, it gets tricky and all these different mechanics happen one by one for a while until they’re thrown at you at the same time. 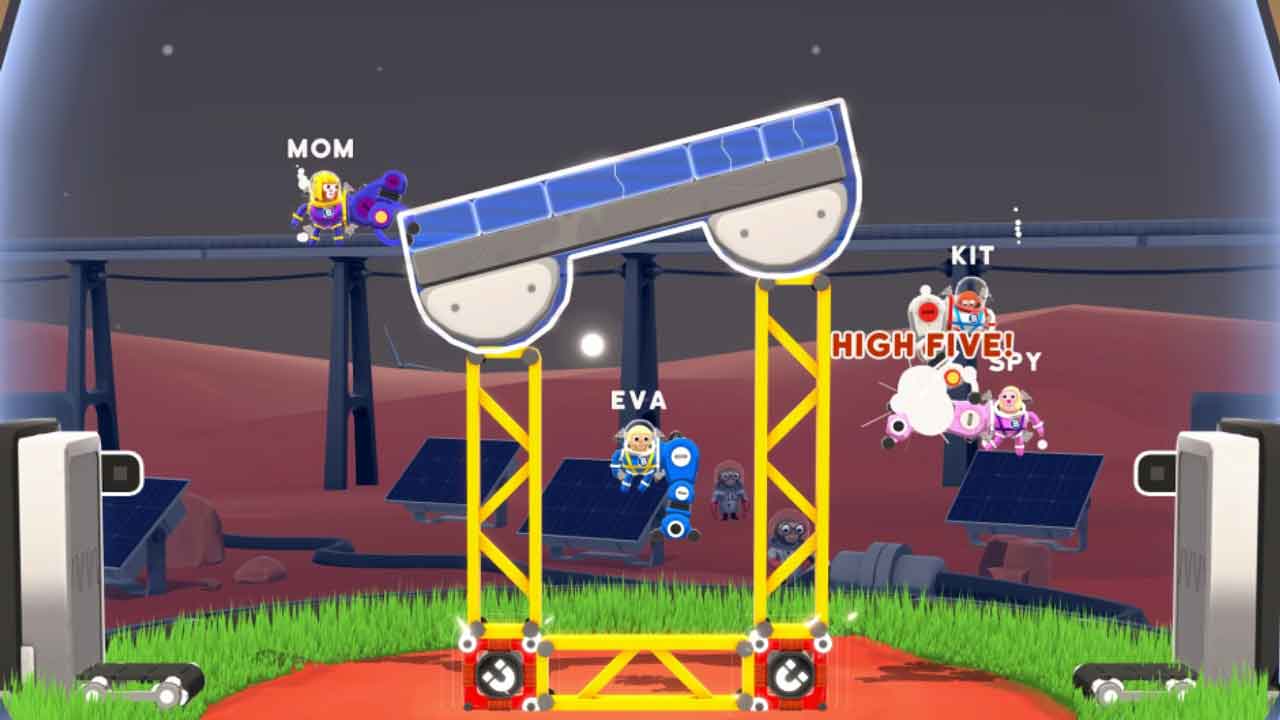 While Einstein was able to figure out physics, it’s not everyone’s strong suit and throw a goofy family member into the mix and you have pure chaos yourself. Bonkis can be played with up to three friends in a couch co-op, which means your peaceful solo building experience can easily be disrupted when someone “accidentally” jumps into your tower causing everything to fall off the building . There’s also no gravity, so one wrong move and that block you spent a minute placing will slide through the lava.

Bonkis in co-op, it’s pure happiness. It’s all about the players working together, but if you all want to do your own thing, you can easily do that. However, this is where egocentricity can be a player’s downfall. Some levels rely on equal weighting of panels and placing items in the correct order to avoid chaos. A solo player who â€œthinks he has itâ€ won’t really get it unless he plays honestly, eats a humble pie, and asks for help. 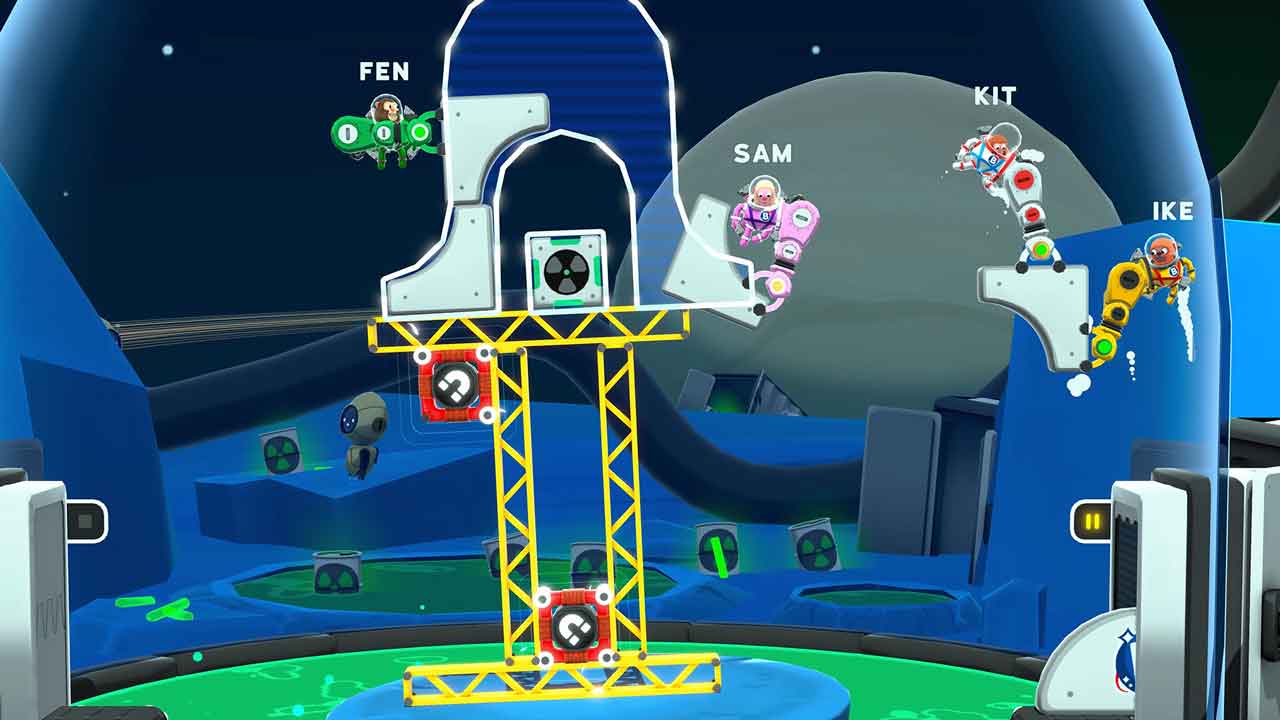 You should also keep in mind that each level has a timer, so you can’t take things slow. It’s the perfect recipe for couch co-op madness. That being said, Bonkis is not something that everyone can pick up and play. Co-op sofa games have that level of accessibility going for them. Take Mario Party, for example – simple buttons with easy to master minigames. Bonkis will require players to have some experience with the game and an understanding of a controller.

When you have a team of players around, Bonkis shines brightly and the levels are fun if not often awkward. It’s based on teamwork, and solo players who prefer to do things on their own will have a hard time pretending to be a badass while secretly wanting to ask for help. 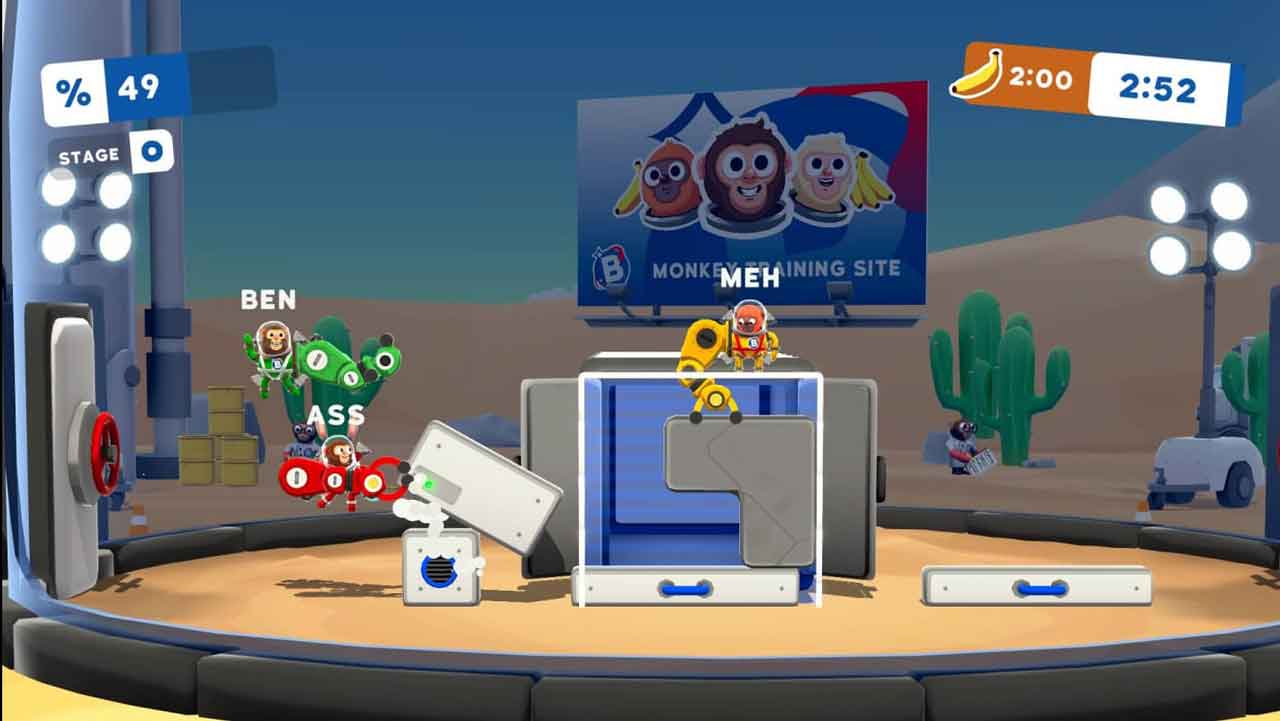 Bonkis is a lot of fun and if you like cooperative games like me then you are going to find something to enjoy here. There is no online mode which can be an inconvenience for some. However, you can PlayShare on PS4 / PS5 and on Steam, so while you won’t have your partner next to you to clap on the arm, they will still be with you in the game.

Superliminal puzzle game gets battle royale mode, because why not

[ad_1] The battle royale trend is everywhere these days, and I guess it was about time that Superliminal should have one too. Except not really, because Superliminal is a puzzle game where you solve puzzles by moving objects and playing with the perspective of the camera. It doesn’t really scream battle royale, but developer Pillow […]

So far, the cooperative puzzle game We Were Here Forever is the best in the series

“Does it mean anything to you if I tell you that I have a code with different types of shells?” asks writer Morgan Park over our walkie-talkies. We stand on either side of a chasm connected by suspended carts whose keys we have not yet found. Tragically, the seashells mean nothing to me at this […]